Home > Education > The Note To Younger Self Book 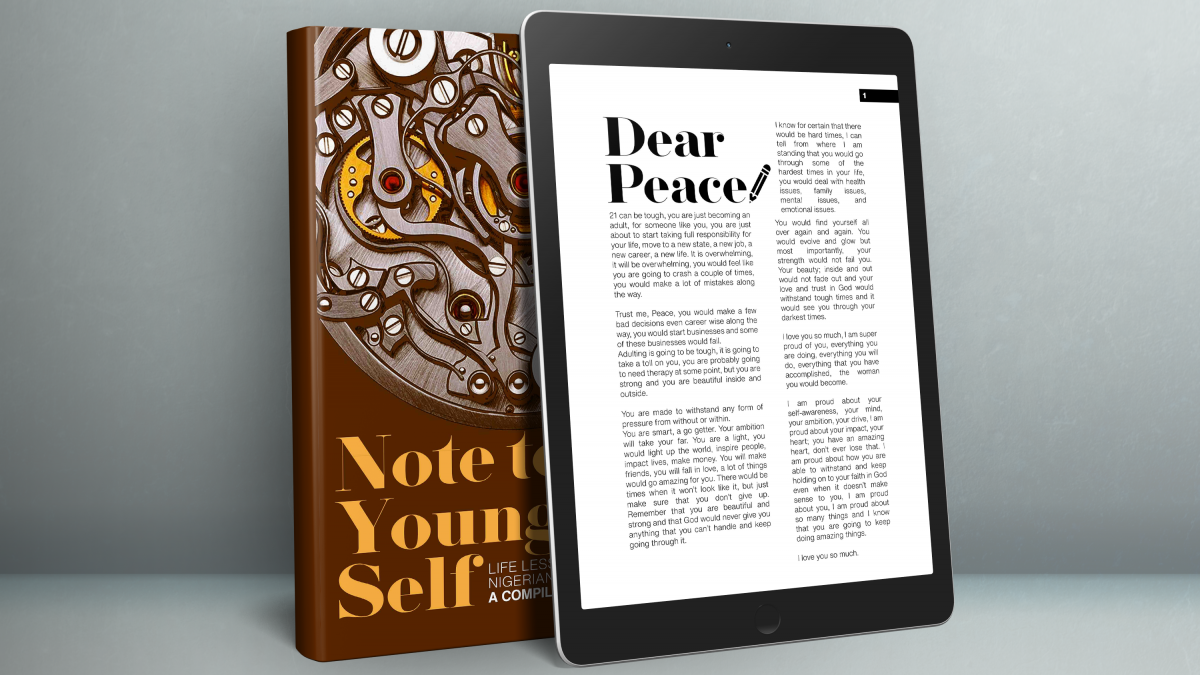 Praise for the Book

I am not a fan of a lot of motivational speakers. This is largely due to the fact that considering the volume of things we do not understand and the number of variables, it is almost fraudulent to make any claims of expertise when the subject matter is life. However, Rhodetails offers a way out in the new piece of work, ‘Note To Younger Self.’
By curating messages from 11 young people to their younger selves, Rhodetails dares to create what you could almost call a life manual for teenagers and young adults.

Interestingly, just like life itself, the manual soon becomes a dilemma in the hands of a reader. For instance, where Ini Oluwa writes to his younger self, “…It is your responsibility to be wayward“, reiterating the need to defy some social constructs in his growth journey, Yinka Adewale advises his younger self to explore more conservative ways, especially in handling conflict. He writes, “In dealing with relationships, especially older people or bosses, don’t try to always be right.“
Again, in writing to his younger self, Abiola AA describes, “I am still battling the demons you fought, still chasing the dreams we had…“, confessing to a major similarity between the person he was and the person he is. This, however, is not the case with Eketi Edima Ette, who confesses to having overcome some of the demons her 12-year old self faced.

All these reiterate the age-long perception that ultimately, everybody’s reality is unique.

This concept extends to even the readers of this beautiful piece of work, as while the authors have addressed these notes to younger versions of themselves, the realities of time and space make it impossible to deliver these messages to their original recipients. Making the little pieces of the original recipients in the readers the practical audience.

Another beautiful feature of the book is its candour. While some of the authors try to predict how things might have gone differently if they had done some things differently, most still acknowledge the fact that they are still in the journey of figuring out life. A journey that seemingly never really ends.

‘Note To Younger Self’ is highly recommended for teenagers and young adults, not because it is the perfect guide for a perfect life, but for the pivotal role it plays in helping its readers stand on the shoulders of not just one, but eleven giants.

Rhodetails did a great job in compiling eleven young adults with different stories but similar patterns to their younger selves. Just that we all know that this is not really for their younger self. It is for you and me.

Inioluwa confronts his childhood beliefs on religion and God in one of the humorous ways ever. His paradoxical advice to be wayward encourages his younger self to go all out of his conservative self. Joke shares the same sentiments as she urges her younger self to take more risks.

Tunji and Yinka emphasize the importance of relationships and people. In Tunji’s words, “People are everything… Have genuine interest and love for people”.

The part where Yinka shares the story about leaving 100 missed calls for a CEO literally blew my mind. Considering the fact that I give up on number 5 or even 4. The tenacity and the art of never giving up was something he shares with Seun and Peace.

Eketi’s excellent narration of her twelve-year-old incident on bullying reminds us of how we magnify problems people/life throw at us. But we would realize that in the grand scheme of things they are not as magnificent as we thought them to be.

Her final words were ‘…banish those memories forever.  … the Annas (annas is a representation of bullies) of this world will never hurt you or put you in bondage again.

Conversely, I love the honest acceptance by Abiola that some demons never really go as you get older and the promise to keep fighting. You know those things you thought you would grow out of but you haven’t or those milestones you set to achieve but haven’t. He reminds me of patience and process and loving yourself through it all.